Early miscarriages are unfortunately very common, yet they are very stigmatized.

For various reasons (I believe in large part due to the abortion culture that minimizes unborn life….yes, that even hugely permeates Christian circles), early losses are not seen as that big of a deal.

People somehow think that with a miscarriage…you were pregnant….and now you’re just not.  This begs the question….where then does the baby go?  It doesn’t just vanish.  It’s not simply “Oh I’m not pregnant anymore.”  It’s not a simple period that comes and goes right on schedule.  It is an actual physical process.

I recognize that there is a spectrum of experiences, and mine may not have been the same as yours.  But here are 8 things I personally was unprepared for with my early miscarriages. 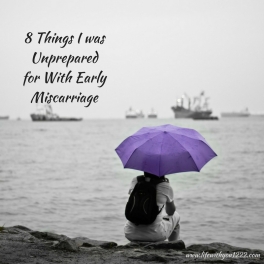