Well….The Pilot and I are now home!!!  Pulled into Laughlin Air Force Base just about an hour ago.  My amazing husband is checking in as we speak and I thought I would take the time to complete the posts on our trip!  Here is the last installment of pictures.

After we left New York City, we traveled to Philadelphia.

We visited Independence Hall (where we were assured that
Nicolas Cage did not really remove a brick from the building)….

…and were able to see the room where the Declaration
of Independence was signed.  Wow!!  The chair on the far
right was where Benjamin Franklin sat!

We also saw the Liberty Bell while in Philadelphia.

Washington, D.C.!  We spent two days there.  The first day we
saw most of the memorials and monuments. 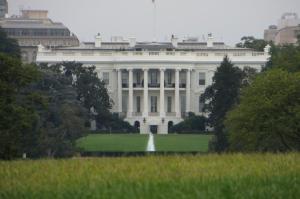 The Presidential motorcade even drove past us!  Obviously we
don’t know for sure if President Obama was really in one of those cars,
but it was still pretty neat!

The second day we went to the National Archives, as well as the Smithsonian
Air and Space museum and the American History museum.  We took
SO many pictures, but for the sake of space, I won’t post them all.  🙂

We were able to go to Ford’s theater, the place where President Lincoln
was shot.  This is the actual gun that John Wilkes Booth used to shoot him.
Unfortunately, we weren’t able to go in the actual theater (they were
holding a dress rehearsal for a play), but we saw the museum.  In it were
all of Booth’s weapons (he was carrying sooo many…guns, knives, and a sword),
the suit that the President was wearing when he was shot, the door to his theater
box, etc.  Across the street we went inside the Peterson house and saw the room where
he actually died.  His blood stains are on the pillow. 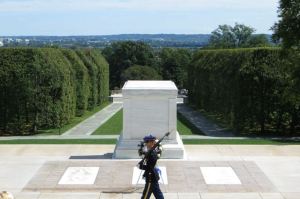 The Tomb of the Unknown Soldier in Arlington National Cemetery.  We
arrived in time to see the changing of the guard.  It was an amazing and
sobering experience. 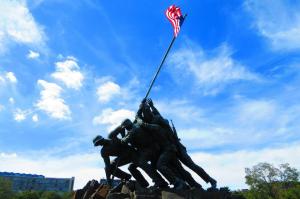 The Iwo Jima memorial.  This was amazing!!!!  I didn’t expect it to be so BIG.
I think this was definitely one of the highlights of the trip. 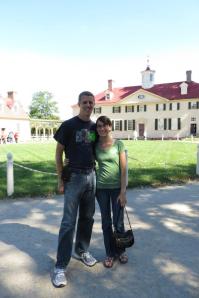 Mt. Vernon!  It was fascinating seeing his house and the things in the museum
(including even George Washington’s actual dentures!).  We took
a National Treasure tour (saw the cellar), toured the house, and learned a lot.
(Did you know that he owned 8,000 acres of land and on any
given night they had an average of 30 overnight house guests?)

That concluded the sight seeing part of our trip.  The last two weeks we just spent
with family and friends.  It was SO fun and relaxing!

We stopped in Tennessee to see some friends who had moved
there from California within the past year (to start
a church plant!).  It was great spending
time with them again!

While in Georgia, we saw B and J, who also used to be
in California.  B and The Pilot grew up together, and all
four of us went to the same church for years.  B and J
are going to be missionaries for New Tribes!

Driving back up to Tennessee, we met some friends for breakfast.
S went to our church in Cali years ago.  Now she’s an Army wife
(her husband is currently deployed) with three great kids!

Back up in Nebraska, we spent time with The Pilot’s brother (who
was then back from deployment) and family.  We played lots of Clue,
went with them to their church’s Awana(ish) program, and had a great time
visiting with them and playing with the nieces and nephew! 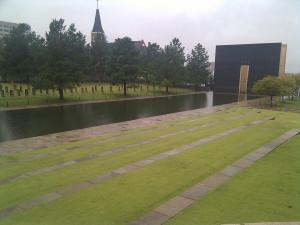 In Oklahoma City, we went with our cousins to the memorial
for the bombing.  It was a beautiful memorial, but definitely very sobering.
A piece of the original building still stood, as well as a big tree that survived.
You can see in the picture on the opposite side of the water a bunch of chairs.
Each chair symbolized a person who died.  There were small chairs for the
children in the daycare who died.

R, L, me, and The Pilot
after church on Sunday!  It was so fun to see their apartment, campus,
and the area they live.  L and I have always been really
close friends as cousins…and it was great spending time with her and her husband!

Our last stop was Lubbock, TX, to see some of my AMAZING relatives.
I seriously am so, so, SO blessed to have such an amazing family.  Unfortunately,
they weren’t all here for the picture, though.  The Pilot and I were able to join
Grandmommy and Granddaddy on their morning walks, and we did some shopping,
ate out a couple times, and played Mexican trains.  Fun!!

And now we are home!  It has been an absolutely amazing 33 days of travel.
I am so thankful that we were able to take this trip.  It was GREAT
spending time with just The Pilot, having fun, seeing sites, and going on adventures.
I love him so much!!!!

Now we shall see what God has planned for us in Del Rio!!